The cover is blown... sort of.

Over Shabbos, I found out that I am not nearly as anonymous as I was a few weeks ago.  A recent post of mine was read by someone who knows the subject of the post, who then spread the word (not out of malice, but because they liked what I said in the post).

Truth to tell, I'm actually okay with it.  When I wrote the post I was well aware that there was a possibility that someone could identify me from the post.  If I were truly paranoid about my "secret identity" I probably would not have posted it to begin with (or at least altered it significantly more than I did).  So, I can't say that I'm totally shocked by this.

In addition, I have no regrets about writing the post.  I was touched and moved by the events of the day...and I still am.  I thought that they deserved to be written about and shared... and I still do.  So I don't regret writing the post, even if it means that many more people know who I am.

In reality, I've been going back and forth on the whole "anonymous blogger" bit for a few years already.  Back in 2009, I was considering just coming out and revealing who I am*.  At the time, I simply chose to remain anonymous. Nonetheless, despite that decision, I did begin the "coming out" process.  I informed some close friends** and family members about my blog.  I posted about real-life people that I knew (even if it meant that their families would be able to identify me).  I even went to a blogger's meet-up without a mask and allowed myself to be photographed.  :)  In addition, many of the photographs that I post on this blog are posted elsewhere on the 'net under my real name.  It was probably only a matter of time before someone saw one of my pictures and said to him/herself, "Hey, didn't I see that picture somewhere else..."

With all that being said, however, I'm not going to be revealing my name here.  I expect that if you really wanted to find out who I am, you could probably do it without too much difficulty.  If you know me in real life and want to ask me about my blog, by all means, feel free to ask.  If you don't know me in real life... well, my name probably wouldn't mean anything to you anyway.  I'm not a famous (or infamous) person... just a regular frum guy in Brooklyn posting on a blog.  So, there's not going to be any "grand announcement" of my identity... but I'm not going to be paranoid about it either.  I guess you can call it "pseudo-anonymous."

For those of you who do know me in real life and are aware of this blog, I ask you to please not make any public announcements.  If someone asks you directly if the Wolf is so-and-so, by all means, don't lie.  But please don't just give it out to every Tom, Dick or Harry who asks without reason (and I leave it up to your discretion as to whether it's a good reason or not).

* Not that my real name would probably mean anything to you.  I'm not a famous person.
** If you're reading this and you're thinking "we must not be close because he never told me..." please don't think that way.  If you never expressed an interest in blogs one way or the other, then there would have been no reason for me to mention it.
Posted by BrooklynWolf at 6/27/2011 11:59:00 AM 11 comments:

It is being reported that Shaul Spitzer, the person accused in the attempted murder of Aron Rottenberg and his family, has been released from the hospital and is back in the yeshiva in New Square.

The fact that Spitzer has been welcomed back to the yeshiva shows that moral compass of the leaders of the community is severely misaligned.

In New Square, you can be thrown out of school for the crime of having a parent who davens in the wrong shul, as happened to Rottenberg's daughter.  You would, presumably, face expulsion if you had a television in your home, had unfiltered internet access, had the wrong books, etc.  But attempt to murder a family in their sleep by fire?  For that, you get to come back to the yeshiva.

Assuming the yeshiva is under the control of the Skvere Rebbe, I have to admit that the fact that Spitzer is allowed back into the yeshiva really makes the condemnation of the attack very suspect.  How can he condemn the attack in public and yet allow Spitzer back into the school when he expels other people from educational institutions for far, far less?  I'm also left to wonder if the leaders of the New Square community haven't completely lost their sense of morality.

Photos: What Is It?

I haven't posted a photo challenge in a while, so perhaps it's time for a new one.  Here's the pic: 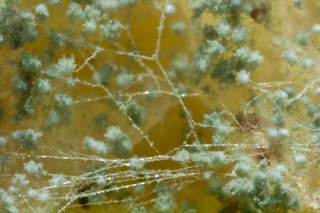 Canon XSi, MP-E 65mm lens at 5x, f/16, 15 seconds
The only clues I will give you is that the image you are seeing is magnified 5x its normal size and the subject(s) was (were) found in my home.

The first one who guesses correctly the subject of the picture receives twenty Wolf points.