Proof of Streimel Wearing Descendants of the Ten Tribes!

Those of you who have young school-age children will know what I mean... 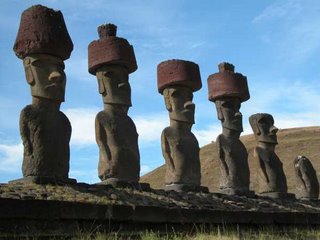 Did you ever see those school-handouts that children receive depicting biblical scenes? Invariably, these handouts will show Moshe, Yosef, Avraham, etc. all wearing typical European garb, rather than what they actually wore in those days. I remember Eeees and I having quite a few laughs at the idea of Yosef wearing a streimel in Egypt.

I'm currently reading Jared Diamond's Collapse, a fascenating book on why some societies succeed and others fail. One of the failed societies that he discusses is the one that evolved on Rapa Nui (Easter Island). This was a society that, at one time, was flourishing. It was a society that had evolved to the point where they could afford to spend precious food resources to construct the impressive moai statues seen in the picture above. Some of the statues (as the four leftmost maoi in this pictures), have a pukau (the large circular stones weighing up to twelve tons) on top of them. But take a good look at the moai with pakau! Do they remind you of anything?

I think, ladies and gentlemen, the proof is irrefutable. It's obvious that (a) the inhabitants of Rapa Nui are the descendants of the Ten Lost Tribes and (b) they wore streimels and long peyos!

Does this mean that the Easter-Islanders are the true descendants of the Ovos and we are merely Khazarian Eastern European fakes?

ooh. did they hold like the chazon ish or like r' tukaczynski legai the indernational date line. big nafka mina.

This is one of your most entertaining posts to date.

Lol, Husband!!
I guess that explains it all. :)

In defense for those who like to to show Moshe with a tishe bekishe -what, prey tell, were the actual clothes of the day?
Great post.

i guess the lesson for this is never abandon hhasidim on a deserted island :-P

It appears only four such statues had streimels... I wonder if the others were allowed to join the minyan.

There is a theory that the Rapa Nui died out because their intestines were punctured by the Shmurah Matzoh their brethren from Poland shipped to them for use on Pesach.

Actually, as everyone knows, the American Indians are the lost tribes of Israel. And how do we know this? A very good question. The French missionaries who "discovered" them didn't know Hebrew. And they also didn't know the language the Indians were speaking. Cue ee mammish dee.