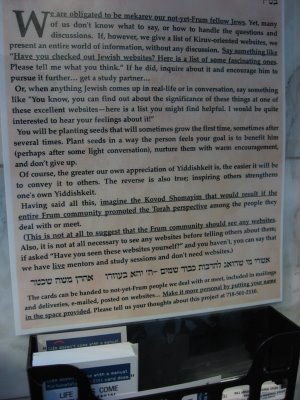 The sign at right hangs in a RW Yeshivish shul Flatbush. It is a sign that encourages Jews to reach out to their non-frum brethren and encourage them to explore Orthodox Judaism.


On the whole, I found this to be a rather refreshing approach. It's not often that you find the Yeshivish crowd actually *encouraging* people to use the internet for Torah learning. They even advise having the prospective frum person come back and discuss what they found on the website. Could it be that the internet might gain some acceptence, even if only for Torah purposes?


Toward the bottom of the poster, it says (emhasis in original):


To be honest, I'm of two minds about this:


On the negative, however, the disingenuousness of the sign turns me off terribly. The sign is disingenuous in that it encourages lying to the prospective frum Jew. The truth of the matter isn't that the reason that they avoid the internet is because they learn from live mentors - the reason is because they maintain that the internet is a place that frum Jews shouldn't visit. If you want to maintain that opinion, fine - I may disagree with it, but you're free to express your opinion. But don't then lie to the prospective "convert." You're asking them to make a major lifestyle change and a lifelong commitment. The least you can do is be honest with them.


So, where does that leave us?


There have been those who have been of the opinion that it's OK to "lie" to prospective "converts" to encourage them to keep the mitzvos. Whether it be telling them about "rock-solid proofs" to the Torah (Kuzari, Four animals, etc.), the sociological aspects of shmiras hamitzvos,("Jewish men don't beat their wives") or anything else, I've always felt that lying does far more harm than good. Eventually, your lie will be found out, and when it does get found out, you'll have taken a person that had a neutral (and positive-leaning) attitude toward Shmiras haMitzvos and turned it into a negative - in the end causing more harm than good - a classic case of "yatza scharo b'hefseido."

There is nothing wrong with stating that you don't have the answer to every question, and there is nothing wrong with admitting that frum Jews aren't perfect and have our own share of societal ills. And if you believe that the internet is simply a bad place to be, then don't go there. But don't encourage others to go while you maintain it's not good and then lie to them about your reasons for abstaining. Above all else, be honest - your lies will be found out eventually anyway.

A very astute comment. Having lived in Monsey for a number of years and seeing how so many frum people were in reality a chillul hashem, I'm happy being formerly frum. I prefer to be judged by the dayan emes rather than the goniff with the langer bord.

"in the end causing more harm than good - a classic case of "yatza scharo b'hefseido.""

How charming. So you think lying is wrong because... it may harm the overarching and ultimate objective -- converting people to frumkeit. And the difference between that altitude and the one conveyed by the sign is...?

I'm not quite sure that I understand what your objection is. I believe that one should maintain truthfulness when speaking to people and encouraging them to do mitzvos. Lying to accomplish that goal is counter-productive because eventually the lies will be discovered and will likely cause the person to feel betrayed and move *away* from mitzvah observance.

How is that disingenuous? Please elaborate.

"believe that one should maintain truthfulness"

Yes indeed, one should.

"Lying to accomplish that goal is counter-productive"

This should be irrelevant. Whether lying helps accomplish that goal or it doesn't -- it is simply wrong. The juxtaposition of the two quoted statements seems to indicate you support the same Machiavellian principle; all you are arguing is that these means don't bring about the stated ends (hence, is counter-productive).

What if it could be convincingly shown that it does accomplish what it tries to accomplish? Again, whether it does or doesn't should be absolutely irrelevant to this discussion.

There is a lot to say on this sign. I personally think personal interaction and just being a friend, rather than referring people to the internet, is much preferable way to conduct kiruv.

There are fantastic site out there (which plenty of frum people utilize) and plenty of sights that I would never refer a person too, either because they are too confusing or too bizarre (Ask Moses, e.g.).

I think anytime you are referring someone to a site, you should check it out and verify that it will help them grow.

There is a lot more to say. Maybe I will find some time to say something.

Thanks for elaborating. Now I understand your objection.

Suffice it to say that I don't believe that lying is justified even if the lie won't be caught. I was simply offering an additional argument to why it is a bad idea -- you will leave the prospective "convert" in a worse situation. I didn't intend to imply that lying in this situation is justified if one will get away with it.

Wolf: This not a lie. Both reasons are true. The Hareidi community does not NEED web sites.

I think this poster is a good thing. Basically is acknowledging web sites are necessary on some level even now. This will become the case even more so in the future. Any ban will be innefective except for those who want to remain totally isolated (<1% I believe).

I think your criques of the ban are unnecessary though. The ban applies to whomever decides to follow it, just like with TV. It is meant for the Haredi community, not for you and your blog readers. It serves as a stark warning for those in the Haredi community who are NOT aware of the problems on the 'net. They are now being educated about the dangers and not remaining naive.

How do you understand Ya'akov Oveenu lying to obtain the brachos?

What you're saying may well be true, but it still doesn't strike me as being completely honest. The poster outright says that the Frum community shouldn't look at any website, including the ones that we are steering prospective frum people to and then instead of telling them that the internet shouldn't be used at all, they give them some other reason.

Granted, a ban that everyone ignores will be ineffectual. And, personally, my hope is that this sign will encourage people to go to aish.com and other such sites and be able to discuss the contents of such sites with prospective ba'alei t'shuva.

I never said that lying was wrong in all situations, merely in this one. You can't compare this case to Ya'akov's.

In any event, as long as you brought it up, I'll give a reply:

What Ya'akov did was wrong. The proper way to get the b'rachos would have been to convince his father that he truly deserved them. In fact, he did no such thing - heck, he never even told his father that he acquired the birhtright years earlier.

Of course, in classic mida k'neged mida fashion, he was punished for his actions - just as he deceived his father, his son's deceived him.

What Ya'akov did was wrong.

You sir, are a superficial egomaniac. Moreover you are buying into one of the most well trodden anti-Semitic canards in history. It does give me some comfort to know that present day K'lal Yisrael can boast of Jews who possess greater personal integrity than the patriarch whom our sages identify as the Amud HaEmes.

In the future why don't you research and think about a fundamental Torah topic for more than ten seconds before you post such childish Torah “exegesis” for the entire world to see? In case you missed it my prior comment was meant to goad you towards greater humility and deeper thought, not to elicit your response. It was, I suppose, rhetorical.

Don’t go writing me back that the Ramban critiqued Sarah’s handling of Hagar or that the Netziv writes that perhaps, Rivka found Yitzchok too intimidating. You are neither the Ramban nor the Netziv.

Firstly, I would take it kindly if you didn't simply issue personal insults instead of reasoning. Instead of saying that I am a "superficial egomaniac," why not simply explain to me where I am wrong? I am not above admitting that I am mistaken, and have issued retractions of things I've said on this blog before.

You asked my opinion regarding Ya'akov Avinu's actions in one specific instance; and I provided it. That doesn't mean that I think that Ya'akov was not an exemplary human being from whom much can be learned - but, on the other hand, he was not infallible and can and did make mistakes during his life. I always thought that the fact that he had to lie to his father to secure the berachos and the fact that he never even mentioned the fact that he obtained the bechora as indicative of a lack of closeness in their relationship. Had he made more of an effort to show that he was the more worthy son (and we can all agree that he was, can we not?), he might not have needed to resort to the deception that he did. The fact that he was punished with the deception of his sons clearly indicates that he committed some wrong -- if he didn't, why was he punished?

In any event, I would never presume to think of myself as the equivilant of the Rambam or the Netziv. But that doesn't mean that I can't look at a text and infer things that are there (or that are noticably absent).

In any event, I now put the matter to you. Please tell me why it was not wrong. If you can present a good enough case, I will be more than happy to retract.

One more additional question to put to you - outside of the realm of Ya'akov Avinu:

Do you feel that deception is warranted in kiruv? In other words, do you believe that the "ends justify the means" and that one can and should lie to prospective ba'alei t'shuva in order to get them to observe the mitzvos?

More yeshivish nonsense. There is nothing inherently evil about the internet; the internet is a tool. Like any tool, it can be used for good or bad. A car, a phone, a radio, a chainsaw, any of these can.

It is insulting that the Yeshivish/RWUO "powers that be" think that the rank-and-file ba'alei batim can't be trusted with themselves, to the point that they are not 'allowed' to view the very information they are being asked to disseminate. What if, instead of 'kiruv information', they were giving out medical information websites to people with a certain health problem? "Here, Shmelkie, your wife should really look at these websites that discuss breast cancer". Would you take such site referrals from someone who has never vetted the information?

This is nothing more than Big Brother in a Borsalino.