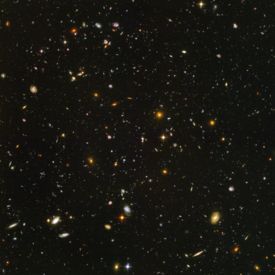 Aside from a few exceptions, all of the objects in this picture are not stars, but galaxies. A galaxy, very simply, is a large collection of stars, usually numbering anywhere from ten million to a trillion. Just about every little point of light in that picture contains millions, or billions, or trillions of stars -- and the whole picture is a miniscule portion of the sky.

In that little patch of sky, there are thousands of visible galaxies, each with it's billions of stars and each thousands of light-years across. Multiply this number by the number that would be visible if you observed the rest of the sky, and you see the wonderousness of Creation.

Of course, none of these observations would have been possible without science. Without science, mankind would never have bothered to explore the heavens beyond what is visible with the naked eye. Without science, we would have never discovered the extent of creation that we have: from quantum particles to galactic superclusters - and, I have no doubt, there is more out there to discover.

Personally, when I behold Creation - whether it be the image of a distant galaxy, a bird gathering sticks for a nest, a shooting star, a picture of an ameoba or the look in my children's eyes, I can only exclaim "Mah Rabu Ma'asecha Hashem."

Scientific observation does not have to lead us away from HaShem. Indeed, it should lead us to Him.

Note: You can download a high-res image of the HUDF here.

"I do take life, mind and purpose seriously, and I concede that the universe at least appears to be designed with a high level of ingenuity. I cannot accept these features as a package of marvels which just happen to be, which exist reasonlessly. It seems to me that there is a genuine scheme of things - the universe is 'about' something. But I am equally uneasy about dumping the whole set of problems in the lap of an arbitrary god, or abandoning all further thought and declaring existence ultimately to be a mystery."

i downloaded that HUDF picture and turned it into a set of computer desktop backgrounds. wow.