Menachem Boas -- Is He Still Working?

There is an artist named Menachem Boas, who specializes in the art of micography (also called microcalligraphy). This is an art form where words are used to form pictures.

There are many micographists in the Jewish community. Menachem Boas, however, is generally regarded as the best of the bunch. While most micographists work in black and white, he works in color. 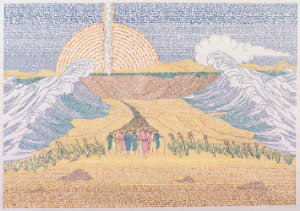 I first came across his works about twenty years ago, when I visited my aunt and uncle in Baltimore. On their wall, they had a Boas print. It was a picture of Mordechai leading Haman around on a horse in Shushan. The text consisted of the entire book of Esther.

When I saw it, I fell in love with the art form. I thought it was both beautiful and clever, both stunning and ingenious (maybe that's why I like Escher as well). While I wouldn't say that I obsessed over it, I always looked forward to the day when I'd be able to get a copy of that print for myself.

That day eventually came when Eeees

bought it for me early in our marriage. It now proudly hangs on our wall.

Over the years, I found other prints of his as well, including one of the Splitting of the Sea (the text of Sh'mos), the seige of Jericho (text of Joshua) and the skyline of Jerusalem (text of T'hillim/Psalms).

However, I've noticed that at least some of his stuff is becoming harder to find. Yesterday, a reader wrote to me asking me about my Joshua print, stating that she couldn't find it anywhere on the web and asking if mine was for sale. I told her that mine wasn't for sale (I love it too much) but I did spend some time looking for it online. Oddly enough, the only picture I found of it online was the one that was on my blog about two years ago. I could not find a copy of the Esther print at all either.

Which leads me to wonder if he is still active in the field, and if he is, why doesn't he set up a website? I'm willing to bet that there is enough of a demand for his work to warrant putting one up. I know that I would probably buy more works from him. I'd love to find out for sure if he's still working in this field and what new works he has. 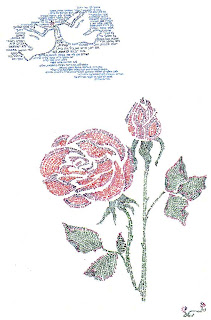 While we're at it, there is another artist that I happen to like in this field as well. Ellen Miller Braun works in Israel and makes some very nice micographic works (she'll also customize one for you for a bar mitzvah or the like). When Eeees and I were in Eretz Yisroel, we discovered her works and bought her Shir HaShirim. You can order them over the web (at the link above) and she'll even ship to the US.

Any other micography fans out there? Let me hear from you.

I happen to love micograpy..but I thing you already figured that out. :)

i like it, but not the contemporary american/israeli stuff (or at least not what i've been exposed to).

Micrography is the Jewish Velvet Elvis.

We have all of Ellen's prints.

Nothing else needs be said ;-)

I bought a signed Boas print off of EBAY a few years back of a wedding under the chuppah - (Song of songs), and have not been able to find any other prints (including this one) besides the five that are posted on the same three websites. I know this is an old posting, but if you have any other information about his 'other' works, I would be interested. I will have to check out Braun's work

hi, i am menachem boas, and yes i am producing new pieces. contact me at golom@optonline.net

come see my new artwork as well as the full line of my current pieces at menachemsmicrography.com menachem boas