My Pick For President

As I said yesterday, I usually keep politics off this blog. However, this being an presidential election year -- a once in four-year occasion, I feel that I can make an exception. And so, I will make my case for my candidate for the highest office in the land.

Let me start out by saying that if there is one thing that I like to see in a candidate, it's an openness and forthrightness about the issues. Even if I vehemently disagree with you, as long as you are out in the open regarding where you stand, and as long as you are willing to back your position with facts and rational arguments, I can respect you. You may not get my vote, but you'll definitely be a step ahead of other candidates in my book.

Unfortunately, this election has been marred by excessive negativity. Both sides have engaged in smear tactics and negative campaigning. Personally, I don't want to hear you tell me why I shouldn't vote for the other guy... I want you to tell me why I should vote for you. In other words, if you can't back up your case without putting down the opposition, then there really is little to be said for you. Both sides have engaged in this type of campaigning, and, personally, I'm tired of it. I saw it in 2000, I saw it again in 2004 and now in 2008 -- and, sad to say, I'm certain that I'll see even more electoral nastiness in 2012.

So, what's to be done? Well, personally, I think that we should only support candidates who send out positive messages. S0, with that, I'm going to make my very first public endorsement of a candidate. My candidate never speaks ill of anyone. I've known this candidate for well over thirty years. In all that time, I (nor I think any of the other millions of people who know him) have heard him belittle others' opinions. He truly tries to send us a message of what is important -- being well-groomed is only of secondary importance to being constant in your message to the American (and global) public. He sends us a message that even people with disabilities, such as wandering eyes, for example, can still be trusted enough to occupy the highest office in the land. He tells us that transparency in your agenda is far more important than personality -- if you know where your candidate stands, you can then make an informed decision.
And so, I give you my candidate. He is constant in his message, he is caring and not at all negative. He is well-loved by the American public. I give you the Wolfish Musings choice for President of the United States in 2008... 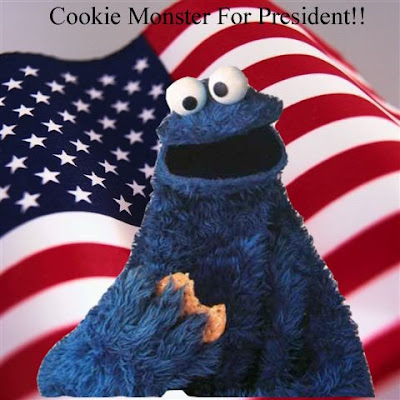 (Inspiration by How To Measure The Years)

C is for cookie. That's good enough for me.