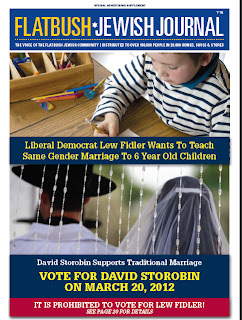 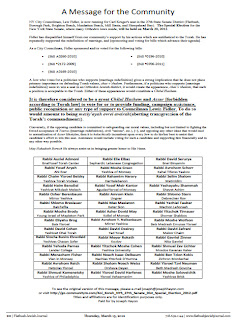 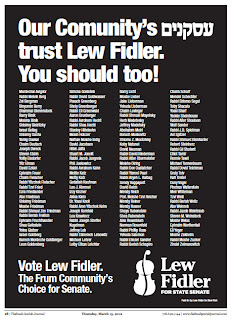 Are there laws regarding what campaign ads they can or cannot refuse? Presumably they'd have a hard time rejecting one.

Politics is a cow stall. You can't get involved without getting covered in manure. That includes rabbis who think that democracy means "You vote for who I tell you to"

Let’s be generous, and assume that the paper is running ads without ascribing to the ads’ content. So the anti-Fidler group paid for an ad on the front page. That doesn’t mean that the paper’s editor believes that helping Fidler is assur.

Good to see you blogging again!

This is why I could never live in Brooklyn, and why I never allow anyone, especially Rabbis, to do my thinking for me.

By the way, Belsky is the same guy who was against reporting suspected child sexual abuse to the secular authorities. In my book, that makes him a piece of crap. In fact, anyone who tells someone else it is 'assur' to vote for so-and-so is a piece of crap.

Rabbi Belsky has been in the hospital for about a month now. The "proclamation" came out after he was admitted.

Being in a hospital does not necessarily render one incommunicado.

I received different postcards in the mail telling me

A. that dozens of rabbonim (their names on the back) endorsed Storobin

B. That Storobin falsely claimed [some of] these rabbonim endorsed him. The card included images of letters from certain rabbonim clearly stating they did not endorse him.

So who’s lying outright? Who cares? Probably each side has their version of the truth. If a rabbi was asked for an endorsement and did not clearly, loudly say “When Hell freezes over!”---Hey, folks, we got Rabbi So-&-So!”

They all demean themselves with this nonsense.