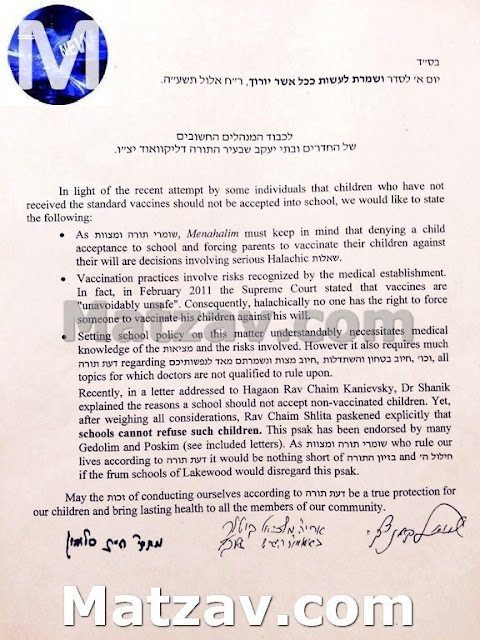 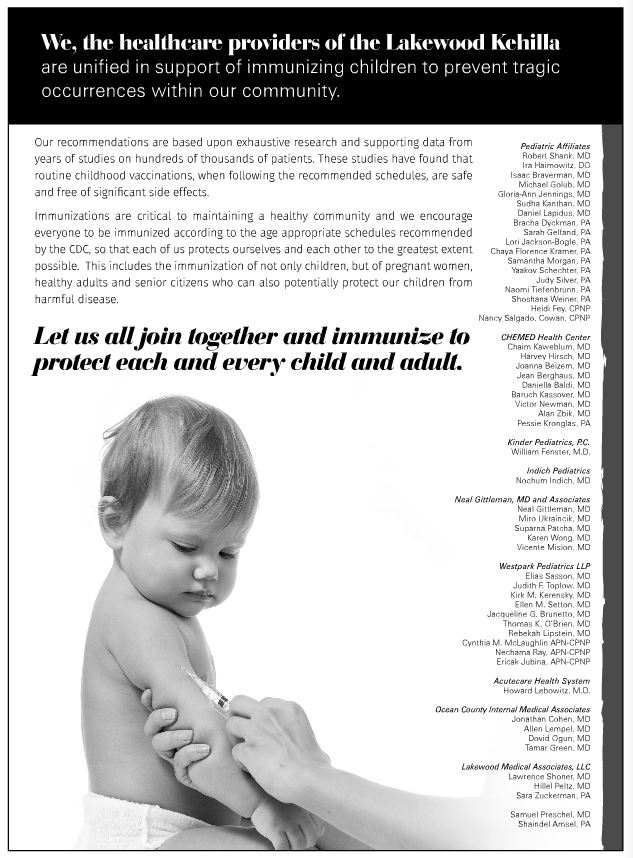 “There is no anti-Semitism charge applicable unless someone dies.”

The Rabbis of Lakewood have publicly protested against yeshivahs that refuse to accept children whose parents did not vaccinate them.

When will the Rabbis of Lakewood publicly protest against yeshivahs that refuse to accept children whose parents are Sephardic or Baalei Teshuvah?

Israel is being buried-alive under an
avalanche of media bias and false accusations.

These web sites can help refute those biases
and false accusations:

Anti-vaxxers are deaf to logic.

Anti-vaxxers claim that all autism is caused by vaccines. I was diagnosed with a form of autism as a child and I wouldn't trade it for any of the diseases I was vaccinated against.

in the vanguard said...

In my humble opinion no good proof on vaccinations exist. There's data that polio's been eliminated but it's strictly anecdotal evidence. The main reason for its disappearance was good nutrition.

You'll find too those inoculated against measles/chicken pox can still get those.

Now with the Corona plaguing America, watch what's happening. Notice the cure of Hydroxychloroquine (as Dr Zelenko cured all his patients with) is scorned by BigPharma. Why? Because there's no money in that to profit. What BigPharma is really aiming at is scaring the public to acquiesce to forced national en masse inoculations.

Vaccinations are preserved with the deadliest poison, namely, mercury. Many children have become debilitated thereby and got autism. The doctor who discovered that autism can be cured via probiotics, Dr Jeff Bradstreet, was thus assassinated by BigPharma. They won't stand for cures, especially cheap ones that they can't get patents for.

The same good people that tell you vaccinations are effective and safe also tell you that fluoride in your drinking water is also safe and good for you. That you must wear masks and gloves to handle any fluoride in a lab, because it too is a horrible poison, is something they won't tell you. And that Vitamin C or E is also good for you, but that you have to pay for over the counter, and won't put it into your drinking water - free, as the do fluoride, they also won't do. Ever wonder why? Did you ever discover why they put fluoride in your water in the first place? It behooves you to find out.

Vaccinations have never been scientifically proven effective. Just show me one such study. And if they are of value, let them give it orally, so the body can sense it from its normal entry point, instead of not giving the tissues that might properly fend off the attack at the appropriate tissue level, before it even enters the blood. Circumventing this route is also abusively invasive.

Why not just deliver antibodies from infected plasma rather than go the vaccination route?

Yes, the math that shows exponential spread of disease is horrible, but the side effects they don't publicize are worse.

And why do you think vaccination's heavy promoters always have association with eugenisists? Because that way it's easy to dumb down the public (eg with mercury, terribly neurotoxic), or simply when the time comes simply eliminate undesirables. I'm just thinking aloud here and don't think I'm axaggerating. It is mainly, however, a big source of money for BigPharma and the likes of Bill Gates.

This conspiracy goes hand in hand with the demands made on the worldwide community regarding CODEX, where they want to control who sells the GMO seeds, and none others, what foods or supplements, and how much of these, you can have.

Vaccinations makes a lot of sense biologically but read more about it and you'll see that if the body has good nutrition, most diseases will come and go without any vaccinations. The terrain is what's all-important, as Beachampe proclaimed, and not the offending attacking agent, as Pasteur had argued back then. I have yet to find one scientific study that proves that vaccines have merit.

It's been some 100 years now that BigPharma has ruled and shaped conventional medicine. Finally some light is being shed on just who these quacks (they're the real quacks, and not those they condemn) in the present Chinese virus phenomenon, and hopefully more people will wake up to the evil the BigPharma mafia is perpetrating. If I would provide you with the huge list of worthy investigators and scientists who have been banned, forced to flee to Mexico or simply eliminated, you wouldn't believe this could be.

Please before making unfounded claims, do some serious research. It's too bad that most schools and yeshivas and rabbis also fall for this dogma, unwittingly, and our poor children must thereby suffer.

Everybody who needs one should have a רפואה שלמה! Zei gezunt!

in the vanguard said...

... and here's a story that made some headlines - today, no less!
https://www.greenwichtime.com/news/article/The-tainted-polio-vaccine-that-sickened-and-15198880.php