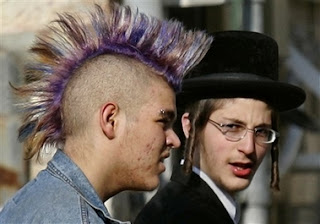 The preceeding, of course, is exactly the opposite of the familiar saying of Chazal (our Sages). And yet, sometimes people (myself included) get so hung up on exteriors that they fail to see that even if the exterior may be unacceptable to your standards, the interior may yet still be beautiful.

This was recently illustrated to me by this picture (credit: AP/Kevin Frayer) which was taken in Jerusalem on Jan 1. I saw a similar photo in a local paper last week, but it wasn't until I saw the Hasidic Rebelle's comments on it that I decided to post about it. Here's what HR had to say:

Is Hashem giving us a preview of what Moshiach, and hopefully us, will encounter when he comes?

My heart and soul is torn to pieces at the obvious contrast. What caused this neshomo to go such a distance? What is he thinking? What will his future be? What are his parents and family going through?

How much are we all praying for All the Jewish souls wandering out there?

Is he really free? Is this freedom?

This picture was taken in Jerusalem yh"b. This is what our holy city Jerusalem has, darkness and light together.

Hashem should light our hearts and souls to be truly free.

While HR does have some valid points in his posting, I feel that he is truly doing a disservice to the gentleman on the left. Certainly he doesn't dress like the man on the right. Neither do I. Do I, too, represent darkness?

Secondly, he's reading more into the person's soul than can be discerned from the picture. How does he know what the gentleman's feelings on the subject of freedom are. Does he consider himself free? I don't know, and neither does HR.

Of course, the last question to be asked is, even though the picture was taken in Yerushalayim, how does he know the person on the left is even Jewish at all? Perhaps he's not Jewish and is therefore free to dress anyway he likes in accordance with halacha?

The lesson here is this: People cannot be summed up based on their appearance alone, even if you find that appearance to be outrageous. Feel free to make comments about his fashion sense. Laugh at his purple mohawk if you want. But don't put his soul down unless you truly know what is contained therein. And, from such a picture, you simply cannot ascertain that.

Amazing post. True he might not be Jewish. Yet how do we turn our backs on another yid. (I didn't look to different in high school than this guy, but you could never tell now).

I'll bet they are brothers. How about that!

I was on the bus last week, going from Beit Shemesh to Jerusalem. Sitting in the seat across the aisle was a young man with cargo pants, tee shirt, no kippa, nearly shaved head, and earphones.

For the entire ride was saying tehillim from a well worn safer.

The cues we use in the states to assess frumkeit are very often meaningless here in Eretz Yisroel.

Interesting article from Rabbi Horowtiz related to this discussion:

Thank you, Answer. That was a very interesting article.

i feel sorry for the guy on the right