My wife has a good friend who is a big fan of the Broadway show Wicked. Wicked is the story of the Wicked Witch of the West (the green one) and Glinda, the Good Witch of the North (the one in white) before the events of The Wizard Of Oz.

We were due to have this friend over for Shabbos, so eeees, in her incredibly thoughtful style, decided to truly have a "Wicked" Shabbos and have our house resemble the Emerald City. She went out and bought a green tablecloth (overlaid with white so that our children will still be able to get a good shidduch :) ). Green plasticware and napkins were bought for the occassion. I was able to find green roses and have them shipped to the house. The water under the oil in the lachter (candleabra) was colored green, as were the guests' shabbos candles. The desert (shown on the table) was 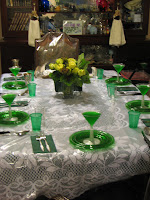 green Jello (the kosher Jello substitute, actually). Green liqueur was obtained for the occassion. Lastly, the guest stayed in my daughter's room where she was supplied with green sheets and a green blanket. My wife and daughter both wore their green robes, while I lamented the fact that I don't own a green tie.

One of the nicest parts of the meal, I thought, wasn't inspired by Wicked, but by another Broadway musical, Joseph and the Amazing Technicolor Dreamcoat. The first number of the play is called "Any Dream Will Do." (sample here) It's a song that really makes no sense whatsoever (IMHO) and adds nothing to the play but merely acts as a filler piece. One thing it does have, however, is a nice tune and interplay between the singer (Joseph) and the chorus of children. What we discovered is that D'ror Yikra goes very well with this tune, especially with the kids doing the chorus parts. Our Wicked friend told us that she thought it was quite nice. Of course, we've also shamelessly ripped off M 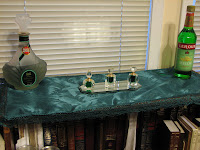 BD in his ripping of Close Every Door and applied the words of M'nucha V'Simcha to it. In the end, we may very well have a complete Broadway review of Z'miros!

Of course, there are those who will view this as sacriligious. Truth be told, however, there is probably very little that is truly and uniquely Jewish in what passes for Jewish music today. Music is one of those things that tends to bleed through cultures and tunes that were uniquely identified with one group tend to be adopted by other groups and adapted to their own needs and made their own. I would be highly surprised if most of today's Jewish music didn't have it's origins and roots in non-Jewish music of various times and places.

Please tell me how to make a link like your 'View my complete profile' in the introduction section. I would like to do so in my blog. If you are not convenience to reply by mail, please answer in a comment blog and I'll come back to check. By the way, I like wolf stories especially like The Call Of The Wild by Jack London.

Hello Wolf,
I think that is neat. Your wife should go into catering.

Michoel (from the beyondbt science discussion)

You could do an Oz theme for bar/bat mitzvahs. But too much greenmay make people think of St. Patrick's day.

i think i can figure out both of those Joseph tunes... never seen/heard Wicked, though.

One of my new 'borrowed tune' favorites is Yom Zeh Mekhubad to the tune of an old "bumblebee tuna" commercial.

My brother introduced me to the idea of Lekha Dodi to the tune of the song "Anytime We Touch" by Cascada. Lekha Dodi is very versatile with songs you may hear on the radio, such as "Girls Not Gray" by AFI, and "How to Save a Life" by The Fray.

One of my favorite Deror Yiqra’ tunes is "The Rose" by Bette Midler, but i can't stand "Sloop John B".

I also sometimes try to make my own tunes... some people seem to like my Yah Ribon.

I haven't really tried, but I don't think most of the songs from Wicked would work well with Z'miros.

I remember seeing Joseph and remarking, "Hey, they took that from MBD/Avraham Fried!" My parents looked at me, smiled, and explained.

I had just such a moment with my son back in September regarding Tom Lehrer, Animaniacs and Gilbert & Sullivan's Pirates of Penzance.

Have fun reading about it.

You mentioned "Oddly enough, I would probably find an Oz-themed bar-mitzvah highly inappropriate". I assume you would object to the public nature of such a display and doing it in Shul as both innappropriate.

Curious: Why do you think bringing non-Jewish entertainment themes into Shabbos is appropriate? Isn't Shabbos also holy? Doesn't this detract from the kedusha of the day? As you said, sacriligious.

Maybe the inappropriateness of Oz is the revelation at the end that it's all a sham. Maybe it'd be appropriate for Mis-nagid's bar mitzva ;-) .

I'll preface my comments by stating that I'll be the first to admit that my feelings on this probably aren't 100% consistent.

That being said, I've always viewed a Bar Mitzvah as being more of a solemn event than a simcha (although it *is* undoubtedly a simcha) which represents a once-in-a-lifetime commitment that the young man (or woman, for a bas mitzvah) to accepting the mitzvos and living a Torah lifestyle. As such, I've always found "theme bar mitzvahs" to be inappropriate.

(That being said, let me also state that when I see them, I keep my mouth shut - if it's not my bar mitzvah, I don't have the right to tell someone else how to run theirs.)

Shabbos, however, is a different story. Certainly Shabbos is holy and has to be treated with respect. However, it is also more... transient (for lack of a better word) and the actions of one particular Shabbos usually do not impact beyond the next week.

As to the choice of tune for Z'miros, I don't think that this is a big deal. Anything which enhances the enjoyment of the Shabbos meal (within reason, of course - we don't want to turn on the TV after all) should be encouraged. If using a tune from J&TATD will cause my kids to more actively participate in the singing of Z'miros, why not? As I mentioned in the post, music bleeds through cultures and what are popular Jewish tunes today were no doubt popular non-Jewish tunes before then. That being so, what's the harm in turning "Any Dream Will Do" into a Jewish tune? MBD does it all the time.

On simchat torah many years ago my father used the Gilligan Island theme as one of the tunes in between hakafot. The Rabbi was not happy :0
I LOVE animaniacs and it is essentially madatory watching material for the kids. Can't wait for the rest of the DVD's to come out.

Wolf:
I was objecting to the entire theme concept, not the tune. Yes our culture has accepted certain tunes, but not all of them. But the whole tune issue does not bother me so much, it's the whole package that does.