Rosh Chodesh and the New Moon

We're all pretty familiar with the way that Rosh Chodesh worked in the times of the Temple... two men would go to a court in Jerusalem and testify that they saw the cresent of the new moon. After examination, the court would announce that the day is Rosh Chodesh (the first day of the new month).However, for those of us who aren't seasoned astronomers, we really have little idea what it means to see the new moon. Most of us don't even notice it until a day or two after the molad, as a thin crescent in the western sky at night shortly after sunset. 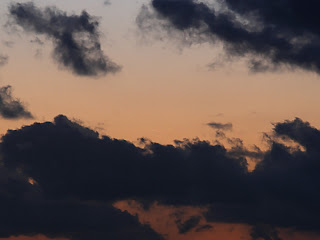 This photo (taken by Laurent Laveder) shows the moon a mere 15 hours and 38 minutes after the molad. Finding the cresent when it is less than 24 hours is very difficult and requires planning. This is the youngest moon that Laveder has ever recorded. As you can see from the picture, it is very difficult to spot the new moon (it is the barely-visible cresent above the dark cloud in the center of the picture). This is what the witnesses went looking for when they scanned the skies in order to give testimony about the new month.

And of course back then ou had to do it with the mark 1 eyeball and no help. And there is considerable variation in terms of where the moon will rise north or south. Today you can use a computer aided telescope to help you. Just say "Point at the moon" and it will show you exactly where too look. Of course it will also help you see it. Once you have found it in the eyepiece it will be easier to see it without.

In terms of being seen the moon has to be about 7.5° from the sun. Exactly when this happens will vary as the moon's orbit is tilted 5° from the suns.

Sky and Telescope sometimes publishes a chart of when you can first see the moon in various places. I think they do it about once or twice a year.

Also if you have never had a chance to see the moon in a telescope do so. The first time you see a crescent moon at 90x or so it will blow your socks off.

Zach's comment also brings to mind a different question. Why are we still celebrating an extra day for some chagim when it is possible to determine exactly when yom tov starts, in Israel and out of Israel? It's not like messengers on mules have to travel miles and miles to bring the news. We have adapted technology in other aspects of observance--sabbath mode appliances, shabbos clocks etc., so why not in this other area?

Beautiful picture by the way.

ProfK - a question that my family has asked for years!

BTW, Wolf, my dad loves the site you linked to. He made it the internet homepage so that we would be forced to learn something every time we go online :).

It should be pointed out that the technological advance in question is a fixed calendar, which goes back something like 1700 years.

BTW if you want to start looking at the sky good telescopes are easy to pick up for not a lot of cash. Just avoid anything that says "625X" or the like.
better yet get a dob from Orion
http://www.telescope.com/control/main/