Take A Kid To Shul 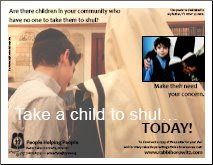 Rabbi Horowitz asked me to bring up this topic on my blog. There are lots of kids in our communities who live in single parent households. While, thank God, I have never been a single parent, I have known quite a few. These people (usually, but not exclusively, mothers) put in long, hard hours trying to raise kids while holding down a job (and possibly even going to school). How they find the strength to do this I don't know -- but they do it simply because they have to.

However tough it is on the single parents, it's also difficult for the kids. Kids from single parent families know (very keenly) that their family is different from other families. Very often, they are ashamed of the fact -- even though they are not at fault for the condition. It's a terrible thing for a kid to live with that sort of shame. It manifests itself in various ways. In a mother-only household, the boy may watch with envy as his friends sit with their fathers in shul and he sits alone. He sees his friends go to father-son learning programs on Saturday night, and he either has to make do with a tutor, a "lesser" relative, or simply not go at all. In single-father households, girls often miss out on the mother-daughter activities that schools have. Boys and girls need positive role models from both genders, and sometimes, for whatever reason, it just isn't present.

I know of this because I grew up in a single-parent household. My parents separated when I was nine years old. My mother moved to Brooklyn and became a ba'alas t'shuva, and Skipper and I did so along with her. My father continued to remain as he was -- not frum. So, in a biological sense, I had no frum male role model. I did have two frum male relatives, but neither were very accessible to me as a kid -- either they lived too far away from me or were just too old to really relate to me on a personal level. As such, when we first moved to Brooklyn, I went to shul alone. Sitting by yourself in shul on a Shabbos morning with a bunch of older men whom you don't know can be pretty intimidating as a nine or ten year old. Sure, I knew that my mother was sitting right behind the mechitza, but, since she couldn't sit with me, it didn't help much - she might as well have been on Jupiter.

As it turns out, I soon made some friends of kids my own age in the shul. It certainly helps for a kid to have friends. However, it also helps even more when those friends have caring fathers.

My friends' fathers in many ways took me under their wing. Skipper and I were often welcome by their houses. We ate Shabbos and Yom Tov meals with their kids, celebrated Pesach sedarim with them, went places with them, etc. I know that each of them cared for Skipper and I and always looked out for our wellbeing. In some ways, these three* men became surrogate frum role-models/father figures for me.

Two of these men are gone now. One of them even passed away on the same day as my father's father (imagine having two funerals to go to on the first day of Chol HaMoed Pesach). I still miss them very much. One is still around -- I think I'll give him a call soon.

The point, I suppose, is this. I know that kids from single-parent households can be embarrassed about their home situation. They can be afraid or ashamed to go to shul without their father or mother. They can be angry and/or upset that they can't participate in the father-son/mother-daughter activities that are prevalent in our communities. I know this because I *was* that kid. I was that kid who didn't have a father who could help me with my Gemara learning. I was that kid who didn't have a father (or older brother) to sit with in shul. I was that kid who never saw his father make a seder. I was that kid who hid the fact that his parents were no longer married from his classmates/bunkmates. And I was the kid who needed someone to step up and help out. I thank God that Mr. N a"h, Mr. E a"h and Mr. P (in no particular order) were there for me to help me in that crucial stage of my life.

What we need today is more men (and women) like them -- people who will take an interest in the kids in our community who don't have a positive role-model of the appropriate gender to look out for them.

* That's not to say that other people haven't taken us (as a family) under their wing. Many people helped my mother, Skipper and I on our path toward frumkeit, each in their own way. And certainly, many of them showed kindness to me (as a kid) along the way. But those three were certainly the ones I was closest to as a kid growing up. The others came along after I was already more confident in my yiddishkeit and at a point where I was a little older and wasn't afraid to go to shul alone and at a point where I was no longer embarrased/ashamed about my home situation.

Passing on what you have learned throughout your life is important. One way to do this is by writing an ethical will.

Thank you so much for bringing this to people's attention!
I have linked to your post, as this is a very important issue that is very close to my heart.

A very relevant topic for me. I am a custodial dad of 4 young children. On Shabbat morning, if one is sick or lazy and doesn't want to go to shul, I find that some fights aren't worth it but the rest of us must remain behind. It would help if someone just stopped in on the way to shul and ask if they can help me get everyone out. When I got divorced, it became as if we had fallen off the radar. No more family shabbat lunch invites aside from family and one or 2 of the closest of friends. Without the invites, socialization suffers greatly. Only one child has friends from the local school and if finally asking for play dates. You can forget about dragging everyone out on shabbat afternoon for the learning group (if it is only for one child). And because it is all on one person, the kids don't get as much individual attention as the could. I miss the special feeling that a women provides for the shabbat environment. Don't get me wrong, I'm doing a bang up job but it would be better to have the missing elements.

Hey wolf can we xchange links on our blogrolls?

Interesting post and certainly something our communities should be aware of.

Smoo,
People assume all kinds of things. If you need the help you can't wait until it is proferred--ask for it. The leader of the learning group might be willing to pick up the one child that is going. Re the socialization, I assume you are feeding your family on Shabbat, so invite someone over to your house for a meal. People reciprocate where they have been invited. Or people may assume that you are the one who will feel odd so they don't invite first. Are there high school girls in your neighborhood? They may need to make their "chesed" hours and would be willing to babysit a child at home so you can go to shul with the others. Or they might be willing to take someone to shul if you need to stay home.

Yes, it would be ideal if everyone else picked up on what help is needed in a one-parent home, but if they don't you need to educate them by asking for specific help. Sometimes people just don't know what they could do to help and will respond positively when they are given some specific way to help.